What Drives Your People?

“Where do you see yourself in 5 years?”

If you’ve interviewed in the last decade or so you’re likely to have heard this question.

I’ve always I struggled with answering it because it seems to demand performance rather than honesty. How can I know where I’ll be in 5 years? At a Neko Case concert? Spending too much money on tea? Trying to salvage my last contact lens from the sink drain? These are the very few constants in my life…

I think that well-meaning interviewers and managers ask this question to try to get a sense of what someone wants. What their aspirations are. How they see the narrative arc of their professional lives unfolding.

But I’d like to humbly suggest that it’s a poor question to get at these things. A leading question heavy with assumption that the respondent must and should have clear and narrow professional aspirations beyond their current vocation. A question that takes it as a given that a desirable employee and person is an ambitious one, unsatisfied with their current level of achievement, with an internal locus of control.

Ambition in this context is interpreted rather rigidly. What if I want to be right here in 5 years, doing what I’m doing right now so well that I have the time and energy to write a novel after work and on weekends? Is that ambitious?

The assumption that ambition is a positive is heavily influenced by our culture, and it should be apparent that it could easily disadvantage candidates who don’t share the same cultural background and beliefs.

And of course, research suggests that not all ambitious candidates are viewed positively.  Women, for example, seem to be penalized for power-seeking behavior in some contexts (here, here, here), which puts them in a lose-lose position when answering a question like “Where do you see yourself in 5 years?” How does one strike the fine balance between ambitious but uninterested in power?

Instead of assuming that everyone is and should be after the same thing (moving up and ahead), what if instead we started from a place of neutral curiosity about what motivates someone? I’ve been pondering what it would look like if we invested more time up front in understanding what motivates team members, at whatever point their career and life intersects with our organization.

Career anchors, defined by Ed Schein, “include talents, motives, values and attitudes which give stability and direction to a person’s career – it is the ‘motivator’ or ‘driver’ of that person.”

Schein believes that we each have a primary theme, or anchor, that has implications for job/person fit. This framework also offers clear value to organizations and managers to align recognition, feedback, and even total compensation approaches to individual team members preferences. 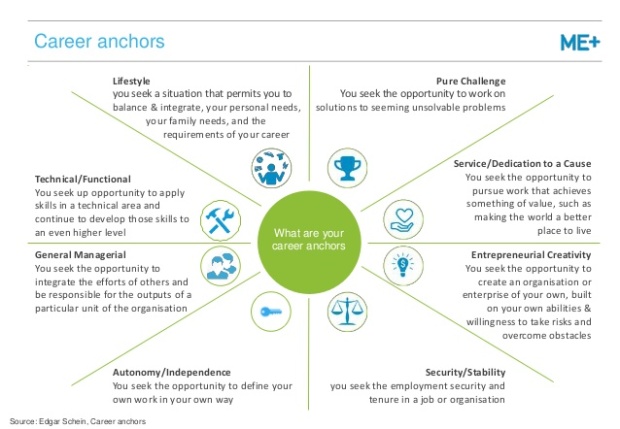 For example, this framework could be used as the basis for an employee/manager discussion about what someone’s primary anchor is. If a new team member indicates that her primary anchor is technical/functional we can assume that a role which is either extremely repetitive, and does not involve new or novel application of her skills will not be a good fit (whereas it might be for someone who indicates lifestyle as a primary anchor). We might be able to suggest (and confirm through conversation) that she appreciates being given development opportunities to enhance her skills and knowledge, more so than public recognition or extra vacation days. And we might then want to ensure that subsequent discussions about her career path in the company emphasize the option to pursue a more impactful individual contributor/expert role, rather than promotion to supervise others.

Another tool I like, to be used in combination with the career anchor framework, is the motivational pie chart created by Jennifer Dulski (we’re big on pie charts at Actionable, too).  I think that combining this exercise, which asks people to indicate the degree to which they are currently motivated by different drivers, with the list of Schein’s categories (with the caveat that people may want to add components they feel are not fully articulated by Schein’s model), introduces the idea that motivations shift over time depending on what’s going on in someone’s life, or the career stage they’re at. Dulski says:

“Perhaps it goes without saying, but vastly different things motivate different people. Every time I do this exercise, I encounter something new. I’ve heard everything from people being passionate about hobbies (rock climbing, singing, etc.) that require them to have flexible work hours, to people saying they are motivated by external recognition and wanting to be on the cover of a magazine. I would never have known about these specific motivators for people if I hadn’t invited them to share. Good managers understand that the individuals on their teams are just that: individuals, with different interests and needs.”

You can download a copy of the motivational pie chart here.

I’m doing some consulting with another team right now, and this is an idea that I’m playing around with as part of an employee onboarding and development process. What do you think? I’d welcome thoughts and feedback.

When your manager isn’t supporting you, build a Voltron – Lara Hogan

I love this post from Lara Hogan about what to do when your manager is inexperienced or not supporting you in the way you need them to. Build a manager Voltron using people in your network! In the quote below, Lara encourages people who may find their manager lacking to take a broader perspective, rather than fall into a helpless or blaming mindset:

“I like to remind people of Paloma’s Ground Rule #2: Stay curious, because every person is a universe:

“When we approach humans as complex vast universes, we create better conversations: Curiosity immunizes us against vengeance, arrogance, stubbornness and other types of dead-end discussions.”

Your manager, as infuriating as they may be, is a universe. Remind yourself whenever you feel frustrated or angry about it that humans are each complicated and fascinating, and there’s more going on in each other than we could ever know or see.”

Sometimes you find yourself reading the Federal Bar Association’s Civil Rights newsletter on a Wednesday night because, well, Twitter. This turned out to be a fascinating piece  on the way that algorithms could be legally deemed discriminatory. At a time when hype about the promise of AI in HR Tech is everywhere (to wit, I’m presenting at the HRPA conference this month, where the theme is “A New Beginning: The Intelligence Revolution”) it’s imperative that we attend to the risks that these technologies might simply amplify and accelerate the worst aspects of our human processes. I’d like to believe that companies selling these technologies are considering these questions and risks …but I’m not sure.

“It’s safe to say that when Congress passed the Civil Rights Acts in the 1960s, legislators weren’t focused on the problem of algorithmic discrimination. Nearly fifty years later, though, predictive algorithms play a major role in driving housing decisions, as well as credit and employment decisions, and the evidence that the use of such algorithms often perpetuates discrimination is piling up. Thankfully, our existing civil rights laws apply no less forcefully when software, rather than a human decision maker, engages in discrimination.

When algorithms are trained to understand the world through such biased data, they incorporate that bias. As a result, instead of freeing us from the legacy of discrimination, predictive tools can solidify and perpetuate the status quo.

And even if an algorithm is free of bias in its original form, many predictive tools are built to evolve as they receive feedback from users’ responses, which may themselves reflect intentional or unconscious discrimination.”

The 48th (!) installment of Kate Griffiths-Lambeth’s annual advent blog series made me so happy. I learned about Rob Baker’s 2017 experiment to use his “love of learning to meet 100 interesting people and have 100 conversations about work” on Twitter a while ago, and was absolutely delighted by it. Here he explains the genesis of this personal challenge and its outcomes. Totally inspiring and impressive.

Photo by Brooke Lark on Unsplash