Where the Cracks Come From

Burnout. Like a particularly unforgettable destination, those of us who’ve paid a visit nod knowingly to one another. No matter how long ago it was, we recall the familiar landmarks of our journey with easy clarity. And we never want to go back.

And yet, earlier this year I found myself retracing my steps along the route to burnout. The déjà vu gave way to a gnawing anger at myself. I was older, even a little wiser! How could I let this happen again?

I think of myself as being prone to burnout, in part because I love to work, have a persistent and frustrating tendency to want to prove myself, and am bad at quitting things. I knew all this, but it didn’t help.

In late 2017, I’d agreed to go part-time at Actionable and had decided to try my hand at independent consulting. Which is how I started 2018 with three consulting clients, plus a part-time role I loved (and struggled to keep within the limits of part-time), as well as trying to maintain all the other things I insist on doing. As the months went by, the juggling act began to take its toll.

We each experience burnout a bit differently. To me, it feels like something invisible but critical has cracked inside me. I look fine on the outside, but even the smallest pressure threatens to shatter me.

The path to burnout is well-worn, which is both comforting and depressing. Like me, many of my fellow travelers blame themselves. And often organizations are quick to agree.

I was responsible for constructing my own work environment this year, but even for those in more traditional work situations, so much about how people are expected to work in 2018 seems designed to make a return visit to the Isle of Burnout unavoidable. With continuous connectivity to our work, the stakes have never been lower for organizations to respect workers’ time. The blurring of work and life, unless it is paired with an organizational culture that accepts the boundaries that workers set and the individual worker skills and personality to set and enforce those boundaries, is a recipe for burnout. 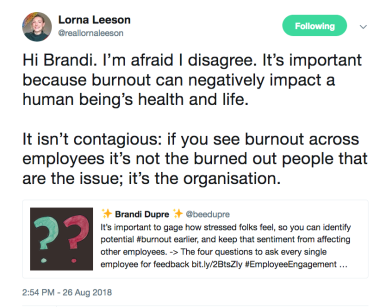 What I’ve found helpful is the idea that none of us wake up one day and find ourselves at the point of total burnout. Rather it is a series of stages, each marked by behaviour that, on its own, might not seem particularly problematic. Understood as a pattern that is likely to arise in conditions that make burnout likely, these can be used as signposts; signals that a course correction is needed. Psychologists Herbert Freudenberger and Gail North described the 12 stages as:

I managed to avoid making landfall on my recent trip towards Burnoutland. That tells me that I’ve made some personal progress in recognizing symptoms of burnout earlier than I once did. And I’m paying closer attention to the conditions I immerse myself in. During my recent job search I interviewed with a prospective employer who explained they’d just let a team member go after she hit burnout and stopped “producing at a high level”. Um, no thanks…

Note: the tweets I’ve included in this post were ones that made me feel understood and encouraged over the last several months – thank you kind Twitter folks for sharing your burnout wisdom!

It’s been a tough week, in a tough month, in a tough year for women. I say that from Canada, aware of the layers of privilege that insulate me from a lot of the political battles being waged in the world right now. And yet, even here almost every woman I know is reeling with dismay and anger at the blatant display of disregard for women. Weeks ago I shared a link to John Oliver’s superb interview with Anita Hill, and does it ever feel like Groundhog day right now…

“It’s an undisputed fact that women often don’t report sexual violence; the Department of Justice estimates that two out of every three sexual assaults aren’t reported to the police. That makes it hard to understand the full toll of these events on individuals and on society as a whole. Using data on crime victims, several studies put the cost of rape and sexual violence somewhere between $100,000 and $200,000 per victim. Researchers at the Centers for Disease Control and Prevention estimated in 2016 that the national economic burden is $263 billion a year. More than half is attributed to a general loss of workplace productivity, with medical costs, criminal justice fees, and property loss and damage each accounting for a portion. About one-third of the cost is borne by taxpayers.

The same researchers also asked about 1,000 men and women if they had experienced unwanted touching, offensive jokes, or other behaviors that could be considered workplace harassment. Among the female respondents who said they’d experienced unwanted touching or at least two other, nonphysical behaviors, 80 percent said they left their jobs within two years.” (emphasis mine – we need to be paying attention to this number)

How to Build a Toxic Culture in your Start-up – Matt Buckland, The King’s Shilling

This is so good, and so true, and not just for start-ups! A few gems that stood out excerpted below, but please read the whole thing.

“When a hire doesn’t work out assume it’s because no one can get it, and do the role yourself! Hired that hotshot because they once worked at a company you think is great and they’re not the rockstar you assumed? Put this down to the uniquely difficult situation of your company and the lack of support that the hire obviously needed. When questioned about the reasons this new didn’t stick give the reasoning of “context” or shrug and say “he just wasn’t right”.  Never specify what “right” is.

Organisational cultures should be fluid – so switch to new management methods every week – OKR’s, Holacracy, top-grading… whatever!  Let “If it worked for X then it will work for us” become your mantra. Your company structure should change to reflect whatever management book you’ve recently almost finished or read half of.

Don’t hire HR. You’re busy disrupting things. Human Resources with all their compliance and regulation will only slow you down. You won’t need them, after all you’re friends with all your employees anyway! There may come a time when HR prove to be useful, negotiating a mis-hire’s severance package or coming up with a new job title that sounds just a little bit more senior than the one belonging to the person who is currently in the role.”

I was really sad to miss the Behavioural Approach to Diversity conference in Toronto this week, so I’m grateful to those who are sharing their insights via Twitter and blog posts. And I really hope James got a peameal bacon sandwich at St Lawrence Market…

“We need to move away from changing minds to changing behaviour”.

“It’s a plea underpinned by a cold, hard reality. You can train a person to be inclusive but it’s unlikely to change their behaviour. And if you convince someone that ‘diversity’ is in their interests with a business case, it doesn’t mean they’re going to carry a ‘new mindset’ around with them in the world. This way of thinking is intuitive but it is also flawed and ineffective.

A behavioural approach to diversity thinks small, like a skilled forester. Both know that one swing of the axe, however powerful, can’t match the compound effect of precise, deliberate, iterative strokes. Over the course of the conference, we heard from researchers who have spent decades honing their craft.”

Photo by Yaoqi LAI on Unsplash

Like Loading...
Tags: burnout, Jane Watson, personal effectiveness, Talent Vanguard
From: Weekly Musings, Work
← You Are What You Read
At the Threshold – Liminality and New Roles →
No comments yet