HR in the Age of Distraction

It wouldn’t have occured to me to write about technology this week, even after attending Adam Alter’s talk about addictive tech at Rotman on Monday, which made such a big impression on me. Then Austin Kleon’s weekly newsletter landed in my inbox headed by this image, and it felt like a sign. 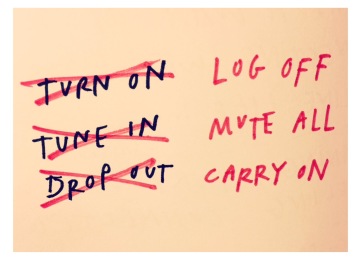 Alter just published ‘Irresistible: The Rise of Addictive Technology and the Business of Keeping Us Hooked‘, which I’ve been devouring this week. His talk was particularly timely given that it took place days after early Facebook investor Sean Parker aired his views about the company’s strategy:

“How do we consume as much of your time and conscious attention as possible,” said Parker, referring to Facebook’s earliest mission 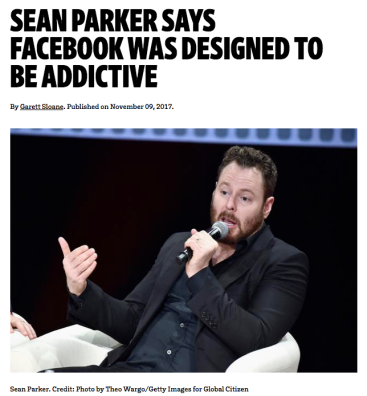 I wouldn’t have considered myself someone who was unaware of the habit-forming power of technology. I’m just the right age to have seen the widespread adoption of e-mail after I’d already started using a PC, and to have owned both a flip phone and an iPhone in my adult life, which is to say I’ve experienced the smartphone arms-race up close.

And yet on my way home from Alter’s talk, while stuck in a subway tunnel for 30 minutes without wifi (#thanksTTC), I used the time to turn off virtually all notifications on my phone, bury apps I want to use less in folders away from my home screen and, in a moment of decisiveness, deleted the only game I ever played on my phone.

In part, I was shaken by Alter quantifying the considerable time that most of us are spending in front of various screens each day, a vast increase since 2002 (the year I graduated university). Even more unsettling was his case that our current definition of addiction is too narrow, and should be broadened to include some of the more problematic dependencies we can develop on technology.

He shared a definition of behavioral addiction:

“The drive to engage in an immediately rewarding behavior despite negative long-term consequences for physical, mental, social, or financial well-being.

And a statistic from Griffiths and colleagues (2011):

“As of 2011, 41% of all adults have at least one behavioral addiction; that number is sure to rise.”

“Addictive behaviors have existed for a long time, but in recent decades they’ve become more common, harder to resist, and more mainstream. These new addictions don’t involve the ingestion of a substance. They don’t directly introduce chemicals into your system, but they produce the same effects because they’re compelling and well designed. Some, like gambling and exercise, are old; others, like binge-viewing and smartphone use, are relatively new. But they’ve all become more difficult to resist”. Irresistible, page 5

In his book, Alter provides an expanded look at the extent to which companies are invested in exploiting basic human needs like social engagement and support, mental stimulation, and a sense of effectiveness and progress to make the experience of using their tech offerings irresistible. The enormous number of people using these apps provides a perfect laboratory for companies to become ever more sophisticated at ensnaring our attention for as long as possible.

While Alter sees the possibility for using this understanding for good, it’s difficult to imagine that happening organically when so much money is at stake.

Why does this matter when we consider people in organizations?

The first and most obvious reason this is relevant for HR professionals and leaders in organizations is to understand more deeply the changed context that people are working in.

Although the term “knowledge worker” is widely used, and there is increasing attention paid to the value of deep work, I think we tend to assume that things are mostly the same as they were 2, 5, or even 10 years ago, with maybe more e-mail.

Reading Alter’s descriptions of the subtle ways that technology companies are now offering apps and games that provide an “irresistible, weaponized version of the experience it once was” makes it pretty clear that we’re up against a well-funded and organized adversary in the battle for our, and our employees’, attention.

“…the problem isn’t that people lack willpower; “it’s that there are a thousand people on the other side of the screen whose job it is to break down the self-regulation you have.””

If you’re still blocking access to popular sites like YouTube, Facebook, and Twitter from your company computers, you’re bringing a knife to this gunfight. It’s true that the amount of time wasted watching cat videos on YouTube is pretty staggering, but the ubiquity of smartphones makes this a minor barrier at best (and is pulled from a traditional command-and-control playbook now woefully out of date).

In the past I’ve written about how we might tackle some aspects of this issue.

2. Our Own Ethical Obligations

I suspect that most people would decry the predatory tactics that are evident in the approach many technology companies are using today. In particular, Alter’s description of game designers using the principles and research from gambling experts seems undeniably sinister.

And yet, HR has enthusiastically jumped on the gamification trend in recent years, seeing the potential for gamified approaches to nudge employees into doing what we want, or learning more efficiently.

That is to say that to date, we’ve tried to emulate attention-sapping apps and platforms, not avoid them. To be fair, Alter is no Luddite and suggests that the cognitive tendencies that addictive tech exploits for profit might be exploited for good. Indeed, many of us get value from apps that push us towards good behaviours like meditation and sleep. I think then, that it becomes incumbent on us as HR professionals and org leaders to think more critically about the ethical implications of trying to use these tactics to capture and direct our employees’ attention, perhaps against their natural inclinations, and in service of the organization’s agenda.

At Actionable, for example, we have developed our platform as a mean to support individual behavior change, but we’re careful to explain that it isn’t designed to be a means of organizational control. Employees can choose to set an individual behavior change commitment for the 30 days following a team conversation (or choose not to). And they can always write their own commitment, so that it’s meaningful to them within the focus of the conversation.

Thinking critically about, and deciding how we design and use technology is what makes it good or bad, rather than this being an inherent quality of any one tool or app.

3. The Stigma of Addiction

This might seem slightly tangential to the other points I’ve taken from Irresistible, but it’s stuck with me all week. Alter argues that the distinction between substance and behavioral addictions is less meaningful now than ever (given the extreme amplification and widespread use of addictive technology) and that means that right now a lot of us are addicts.

The stigma associated with addiction generally, and substance addiction especially, deserves our attention. If at least 41% of us have a behavioural addiction, perhaps a meager silver lining can be found in the form of empathy for one another and those that grapple with substance addiction. In the face of an opioid abuse epidemic, this understanding and compassion would be undeniably helpful for employees, friends, and family who have been effected by addiction in some way.

Monetising Millennials: What the Corporate World Thinks it Knows About Young People – Alex McKinnon, The Guardian

The fire! It burns!!! Alex McKinnon may not be invited back to the Millennial 20/20 Conference in Sydney (where the wifi password is “SmashedAvo”, but I don’t think he cares. This well-written article is the critical take-down of ‘Millennial marketing’ that the world needs.

“I learned very little about millennials at Millennial 20/20, save that a great many people are working very hard to turn us upside down by our ankles and shake us until money comes out. Being part of a generation bent under neoliberalism’s deadening legacy, from housing affordability to climate change, is exhausting enough; to see the companies that profit off our exploitation rhapsodise about their self-appointed status as “change makers” and “thought leaders” just adds salt to the wound.”

I loved every minute of this podcast episode with Claire Wasserman of Ladies Get Paid. Host Daniel Stillman and Wasserman talk about designing conversations and transformational events using human centered design principles, and thoughtfully examine ways that men can be brought into LGP’s women-only discussions. They both share some great insights, all in the context of Wasserman’s impressive journey to create and scale Ladies Get Paid as a way to change the conversation about gender and money. Along the way, she’s created an incredible community of engaged women (seriously, her Slack is the most welcoming and active one I’ve ever been part of and it’s close to 7,000 members). Definitely worth a listen.

This topic continues to occupy a considerable portion of my brain. I’ve been thinking a lot about the structural factors in organizations that contribute to the prevalence of sexual harassment. This touches on a piece of it, I think.

If we are serious about making corporations more responsive to how their workers are treated, we need structural reform that will give workers a voice in the governance of their own work lives and the right to bring a greater diversity of views before the board.”

Photo by Stefan Cosma on Unsplash