A Season of Bright and Shiny Things

This week I finally made it to Social HR Camp (after scheduling conflicts in past years) and got to hear about all kinds of cutting-edge HR/People tech making its way onto the market. It was an exciting and interesting event. Also this week, I had dinner with a friend who shared that her 600 person organization still does payroll manually. She had the carbon paper pay slip to prove it. Reader, I nearly choked on my focaccia bread.

My friend explained that her company had tried to implement a modern payroll system years ago, but no one used it and people fell back into their comfortable, manual processes.

At Social HR Camp, no one was talking about payroll, but lots of people were talking about AI.  There was some intriguing, intelligent, and inspiring tech on display (along with truly superb speakers), seeking to address needs related to recruiting, diversity and inclusion, and engaging employees. Encouragingly, there were only a couple of moments where I felt like I was in a dystopian novel, like when someone started talking about using sentiment analysis on employee survey responses to “radically scale empathy” (shudder).

This is the strange world we live in, where technology is changing much faster than most people, and almost all organizations, can. I used this Deloitte visual in a recent talk I gave at the Expo for Design, Innovation, and Technology to illustrate that point: 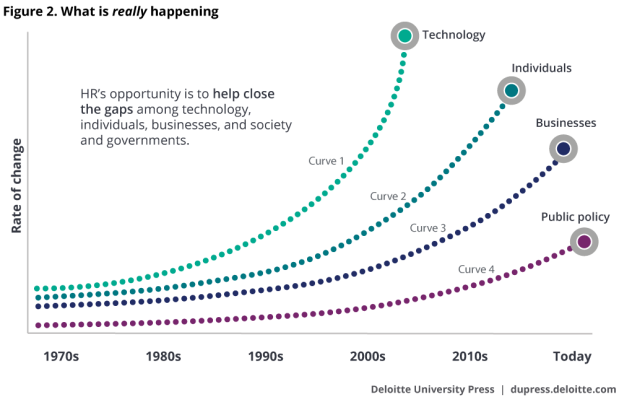 Closing out SHRC was Johnathan Nightingale of Raw Signal Group (and co-author of one of the best books I’ve read this year: “How F*cked Up Is Your Management: An Uncomfortable Conversation About Modern Leadership”). Nightingale knows something about tech, having been VP at Firefox and Chief Product Officer at Hubba. His message was the perfect end to the evening:

“An app can’t make your people give a shit”

Nor, as he noted, can an app make you give a shit about your people. This is a critically important message for, well, everyone, but in particular HR professionals. We have difficult jobs, made more complex by the demands of the modern workplace, the pressure to provide simple answers, and the fact that we are meant to be experts on people, who are inherently unpredictable, complicated, and irrational (as are we). Technology can do a great deal to help us, but the temptation to see each new solution as the silver bullet that will address the core challenges of our jobs is both understandable and difficult to resist.

David D’Souza made this point with great clarity in a recent post:

“I do a lot of conference speaking and I’m often asked ‘What’s new?’. It strikes me that not as many people ask me ‘What really works?’.

“They ask ‘What’s new?’ as if they know the answer to that question must automatically be something implicitly desirable and useful. They ask it as if they are absolutely positive that they are missing out on the one piece of technology or the one approach that will solve the problems they have in their far from perfectly functioning organisation. ‘Please give me one idea to take back to the office’. They don’t want that idea to be an oldie, but a goody. They want new.”

It’s more than shiny object syndrome, I think. It feels as though it’s driven by a particular kind of anxiety about our value as a profession, and our place in an organization’s ecosystem. I reflect often on this post by Allon Shevat, which describes the current state of HR as one that evokes anxiety in its practitioners, who often respond by defaulting to “transactional efficiency” and who “guard their position” through a performance of “apparent effectiveness and wow-wowing”.

“What we have is an obsession with initiatives. An unhealthy reliance on filling up our annual plans with activity because any hint of white space in that plan would suggest either indecisiveness or inefficiency. What we did last year can’t be good enough – we need to be better this year – so what next?”

This has real consequences for us as individuals and our organizations. In a post published this week titled “This is Why Your Job is Becoming Impossible to Do” Bob Sutton writes:

“…we call it “The tragedy of well-intentioned organizational overload.” It happens because so many organizations are filled with well-meaning people who keep adding little bits of complexity and friction.

“Sometimes…the additional load is added for the most noble of reasons. Other times, their motives are less noble — if still well-intentioned. They call meetings, add new rules, or require extra paperwork to demonstrate their value to their peers and bosses. There is also a feeling, a self-serving bias, that so many of us who fuel this problem can’t quite shake (I plead guilty) that “my additions are righteous, add trivial amounts of load and friction, and are necessary, but yours are ridiculous red tape.””

How do we inoculate ourselves against shiny object syndrome? How do we resist the siren call of what’s new instead of what works? How do we recognize when we are prioritizing our own needs ahead of those of the organization? How do we sense and address our professional or personal anxiety without compromising our critical thinking?

I don’t know for sure, but I’m fairly certain it has to do with some of this stuff:

Technology can undoubtedly free HR from manual, repeatable processes. It can undoubtedly offer our organizations a range of options that may (or may not) help us achieve our objectives and overcome our obstacles. New developments like AI brim with compelling potential. But adding technology does not automatically result in a better, more efficient, more engaging, or smarter organization. Tech solutions clamour to be chosen but are less capable of diagnosing root cause org problems. They can’t ask tough questions gently, or have difficult conversations for us, or convince people we’re empathetic if we’re not, or automate the nuanced interactions that make people feel they belong.

We need technology, but technology needs us too, if it’s to live up to its promise.

Missed last week’s post on the ethical implications of addictive technology in the workplace?  Check it out: HR in the Age of Distraction

This is the third piece in a series from Laurie Penny exploring the broader context of the recent and ongoing revelations about sexual harassment and assault perpetrated by high profile men. In these posts she has considered the misunderstood concept of consent, and structural and cultural factors. She’s an astonishingly good writer, and I highly recommend this series of insightful articles.

“It turns out that this isn’t about individual monsters. It never was. This is about structural violence, about a culture that decided long ago that women’s agency and dignity were worth sacrificing to protect the reputation of powerful men and the institutions that enabled their entitlement.

“…we have apparently created a world where it is incredibly difficult for a man to desire a woman and treat her as a human being at the same time.”

From Inboxing to Thought Showers: How Business Bullshit Took Over – Andre Spicer, The Guardian

Based on my Twitter feed, a great many people I know and follow have already come across this brilliant read. It provides a concise overview of the rise of management and with it the evolution of both dubious practices and a language that can be bewildering, perhaps intentionally, as Spicer suggests.

It is also an important reminder of the cyclical nature of management trends and fads. As the theme of my post this week highlights, our predictable attraction to ‘the new’ makes us easy targets for ‘disruptive’ thinking that is merely recycled and rebranded approaches that were embraced and then set aside in decades past

“In the late 18th century, firms were owned and operated by businesspeople who tended to rely on tradition and instinct to manage their employees. Over the next century, as factories became more common, a new figure appeared: the manager. This new class of boss faced a big problem, albeit one familiar to many people who occupy new positions: they were not taken seriously. To gain respect, managers assumed the trappings of established professions such as doctors and lawyers.

A century of management fads has created workplaces that are full of empty words and equally empty rituals. We have to live with the consequences of this history every day.

I found myself wondering why otherwise smart people so easily slipped into this kind of business bullshit. How had this obfuscatory way of speaking become so successful? There are a number of familiar and credible explanations. People use management-speak to give the impression of expertise. The inherent vagueness of this language also helps us dodge tough questions. Then there is the simple fact that even if business bullshit annoys many people, in most work situations we try our hardest to be polite and avoid confrontation.”

The OD Mindset and Facilitation Design – Meg Peppin, Halls Are Made For Madness

This post is a concentrated shot of wisdom and experience from an experienced OD practitioner and facilitator. I’ve bookmarked this for regular review ahead of any facilitation I undertake.

“Recognise when your need to close something down is because you have run out of time, or whether you are in task mode and want to tick a box, or whether the conversation isn’t going how you think it should and you want to exert control.

One bit of reflection I remember from this recent CIPD session was the relief expressed by one person that the facilitator does not have to be visible at all times.   Facilitation is not a performance.”

Photo by Brigitte Tohm on Unsplash